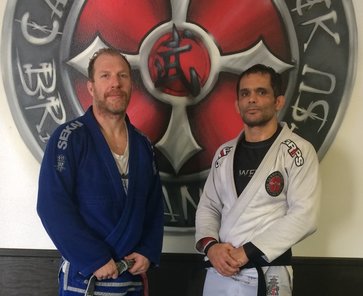 ​
​Classes at Gold Country Jiu Jitsu are taught by black belt instructor Michael Quaintance, better known in the greater Sacramento area's martial arts community as "Q". After 15 years of training Michael "Q" received his black belt in Brazilian Jiu Jitsu in 2012 from internationally known Brazilian Jiu Jitsu world champion professor Cassio Werneck. He holds this to be the single most important accomplishment of his life.

"Q" has tested his martial arts skills in many different arenas. He has wins in numerous Brazilian Jiu Jitsu tournaments including the US Opens and the Worlds. He was a professional MMA fighter with wins in the IFC, Gladiator Challenge and King of the Cage. Additionally, he has worked as a bouncer in very violent settings where he has successfully and respectfully applied his martial arts skills to maintain safety and order.
Copyright Gold Country Jiu Jitsu 2022